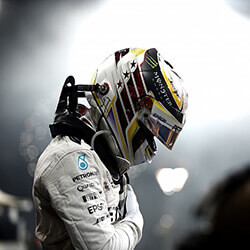 Mercedes driver Lewis Hamilton has announced his decision to change his name to include the original surname of his mother, namely Larbalestier.

According to the seven-time F1 world champion, he plans to include his mother’s surname alongside his own. Hamilton’s parents separated when he was only two. He lived with his mother up until the age of 12, where-after he moved in with his father.

Hamilton spoke about his plans ahead of the start of the new Formula 1 season. The 37-year-old spoke of how proud he was about his family’s name, and in particular that of his mother. He also said that he’d never truly understood why it is that a woman should lose her name completely upon getting wed.

It isn’t yet clear whether the intention is to create a hyphenated surname, or in which order the combined surnames would fall.

Hamilton enjoys a close bond with his mother, whom he invited to accompany him to Windsor Castle for his knighthood in December. He describes her as supportive, loving, and a wonderful mother.

The F1 driver is currently getting ready for his 16th Formula One season, and hopefully a successful winning back of the title from Red Bull rival Max Verstappen. The Brit did however last week allude to the fact that Mercedes appears to be trailing behind Ferrari and Red Bull regarding capacity and pace ahead of the new season.

Hamilton said he has his hopes pinned on improvements for extracting more from the car before Sunday’s opening event in Bahrain.